“People have died from the drugs I have prescribed…..We Doctors have a destructive therapeutic mind set and this is causing widespread and long term harm to society “. So begins a typically thought-provoking Bad Medicine view and a discussion excerpt in the British Medical Journal, in response to the report by a forensic toxicologist that 35% of heroin overdose victims had misused gabapentin or pregabalin (editorial 15 Aug 2013). How apt are the asps of the caduceus – adopted erroneously by the medical profession in the 19th century as a result of a mistake by the US Army Medical Corps? The Hippocratic Oath began with the words “I swear by Apollo the Physician and by Asclepius …… (whose staff in mythology had only the one snake!)…. I will neither give a deadly drug to anybody if asked for it, nor will I make a suggestion to this effect”. To err is truly human, and physicians are no more exempt from blunders. The two snakes of the medical caduceus actually belong to the staff of Hermes – God of commerce and thieves, and guide to the Underworld. Hellarious! 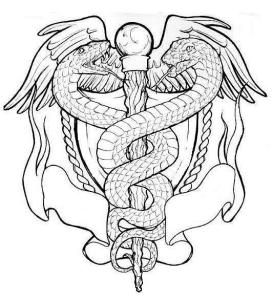 The fatalities’ poisoning was associated with abuse in order to enhance euphoric effects of opioids, and GPs have been alerted to avoid iatrogenic involvement (remember do no harm!). Information is readily accessible, however overly abundant. Distilled summaries are published by the Cochrane Collaboration. Investigating any benefits of the GABA-likes gabapentin or pregabalin would reveal systematic reviews of studies by Üçeyler, Sommer and Häuser et al finding that “The amount and quality of evidence were insufficient to draw definite conclusions on the efficacy and safety of gabapentin …………. The anticonvulsant, pregabalin, demonstrated a small benefit over placebo in reducing pain and sleep problems. Pregabalin use was shown not to substantially reduce fatigue compared with placebo. Study dropout rates due to adverse events were higher with pregabalin use compared with placebo.”  Häuser co-authored an 11-year study of fibromyalgia outcomes with Dr Fred Wolfe which reported in the European Journal of Pain Sept 2012 a conclusion that “Drug costs are substantially higher because of NCAD (pregabalin, duloxetine, milnacipran) use, but we found no evidence of clinical benefit for NCAD compared with prior therapy.”(tri-cyclic anti-depressants ie amitriptyline). Confirmed by Prof Beth Smith’s meta-analysis of 51 publications in 2011 concluding “Amitriptyline was similar to duloxetine, milnacipran, and pregabalin on outcomes of pain and fatigue“. Wolfe’s colleague Dr John Quintner wrote that “a minority of patients will report substantial benefit with Lyrica… Many will have no or trivial benefit, or will discontinue the drug because of adverse events“. Which somewhat contradicts the tick of approval given by the US FDA, and it gets no better. The April 2010 Journal of the American Medical Association article ‘Anticonvulsant Medications and the Risk of Suicide, Attempted Suicide, or Violent Death’ points to an increased risk with the taking of gabapentin. Which is where we started…. and whence we shall return