Paul McCartney wrote this song watching monkeys in Rishikesh, wondering what’s holding us back from doing it anywhere & with anyone. Near-same DNA also drives us to procreate or perish, a larger tribe being protective against predators. Compare the Emperor penguin, whose solitary annual egg is so precious that the male nurses it for the Antarctic winter. Now that’s hardcore toughguy! Can you imagine SAS or Special Forces taking on 2 months duty at 20 below, round the clock? Whether our species is better off breeding or brooding is best explained by Butters in the International Women’s Day episode screened in Oz yesterday and linked as a clip. These 8-year old boys are our best hope for future men moving on from our neanderthal roots. 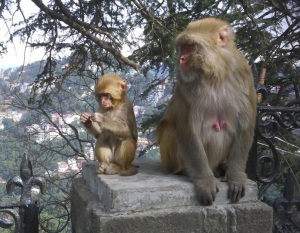 Hunting tigers to the brink of extinction has successfully risk managed our perishing, but we haven’t kept pace by evolving. Jon Kabat-Zinn wrote in ‘Full Catastrophe Living’ “But the flight-or-fight reaction kicks in even when there is no life-threatening situation facing us. It is sufficient for us just to feel threatened.”  The monkey brain reacts by releasing catecholamines such as adrenalin in order to to enhance survival – quickening the heart and vasoconstricting peripheral blood vessels. Hopefully the higher brain cortex can override the chemical flood with some rational control, delivered electrically through the parasympathetic nervous system. The degree of balance in this response is measured by HeartRate Variability studies of the fine-tuning control that can be achieved.

The value to an organisation of equanimity over impulse is promoted by neurologist Alan Watkins with his advice to HR on calm leadership. A subjugated ‘rest & digest’ parasympathetic system is called dysautonomia, and the fibro & CFS patient communities are passionate advocates of A/Prof Chris O’Callaghan with his Tilt Table Testing at the Austin’s Blood Pressure Clinic. Explaining the process when giving a diagnosis doesn’t often lead to resolving the internalisation of stress, which blocks autonomic responses. Carrying the muscular tension inside soon limits depth of breathing, favouring rib expansion over the more relaxed soft-belly diaphragm. Flexing your rib cartilage gets difficult with age, and it hurts. Luckily there’s instructions on how to breathe at the site breathing.com, and it’s never too late to learn. Psychoendoneuroimmunologists understand the impact of carrying around allostatic load, unfortunately noone can understand their bridging of four disciplines. Certainly not the GP, nor the patient with their expectation that there’s gotta be a pill to fix this. I hope South Park will explain this in one of their inimitable parables for me. Meanwhile, here’s a contemporary take:

This post’s theme is more cleverly conveyed by Zvyagintsev in ‘Leviathan’, where the human condition is literally spelt out for you. Putin thinks the film’s about himself, but of course he would.