… from ‘Do not go gentle into that good night’, Dylan Thomas

Before delving into the massive NHMRC research investment of public money  ($5.1m upfront) into Pfizer’s Lipitor that is STAREE, some preliminaries:

Few Australians would be unaware of the furore raised by Catalyst (The Heart of the Matter), and subsequent retraction by ABC management of the program. A couple of opinions on Dr Demasi’s journalism by Drs Briffa and Coleman, and their arguing in blog comments shows that even those in general agreement were discordant. Instead of ‘playing the ball’ and take on the well-orchestrated industry, I’ll ‘play the man’ and focus upon individual proponents of statin therapy. And their complicity. It’s a softer target due to a weakness in humanity – insatiable need for funding.
Heart Foundation CEO Jen Johns immediately warned that sales of statins would be harmed, and a month later they published a poll by their Rob Grenfell showing 10% had stopped the therapy. Their corruption is further detailed at this update, and is unsurprising given that the decade-long president is father of Pfizer’s lobbyist Andy Thirlwell. Even before the exposé aired, Prof Emily Banks had pointed the bone * thus: “It’s likely that if this program goes ahead, and it does the unwarranted undermining of statins, that there will be people who didn’t have to have a heart attack and didn’t have to die from a heart attack, who will die through reducing use of statins“. An expert in this field, having authored ‘Erectile Dysfunction Severity as a Risk Marker for Cardiovascular Disease Hospitalisation and All-Cause Mortality’, she’d be appreciative of Pfizer’s infamous blue pills for ED. Dr Grenfell concurs with a warning, “These results tell us that every man who is suffering from any degree of erectile dysfunction should be seeking medical assistance as early as possible“.

Grenfell and Tonkin et al wrote of the confusion in lipid management in May 2015 ‘Clinical Guidelines on Hyperlipidaemia: Recent Developments, Future Challenges and the Need for an Australian Review’ – considering the perspective of the American Heart Association “… the maximum tolerated dose of a statin be generally employed”, but their own concern is absence of an optimal target level: “Whilst the cost-benefit analysis of statin therapy is generally favourable, it is very sensitive to the absolute risk level of the patients selected for therapy”. Andrew Tonkin had already made his mind up in 2005 though, as chair of the Heart Foundation’s consensus Position Statement on Lipid Management a number of guidelines and criteria are given to prescribers. Along with a conflict-of-interest declaration. The same “provision of consulting services to Pfizer” should also have been disclosed in a JAMA report ‘Association of LDL Cholesterol…with Risk of Cardiovascular Events Among Patients Treated With Statins’, that was subsequently amended due to medico complaints to the journal.

Bias is a relevant fact in STAREE (STAtins for Reducing Events in the Elderly), but frequently missing. Monash colleague Sophia Zoungas should also have declared a 2007 Pfizer personal grant of $55k in articles such as ‘Treatment of Dyslipidemia and Cardiovascular Outcomes: The Journey So Far—Is This the End for Statins(?)’ advocating “the first [Randomised Controlled Trial] to determine the effects of statin therapy vs. placebo in an apparently healthy elderly cohort living independently” ie preventative Lipitor for the over 70s. This is not however, a trial designed to test a hypothesis. It’s an experiment on the elderly to see what happens. Lipitor is the hammer, let’s see if it nails aging! Extending of life is the outcome being investigated – meaning that if they’re wrong, then shortening of life may become apparent.  A successful trial is assured, since my previous example from this department shows an outcome can be invented with impunity. And worsened death rates ‘adjusted for’.

One example of deception is apparent already. In July ’14 Current Opinion in Cardiology neither professor mentions Pfizer’s backing, but offer panacea in claiming: “In a meta-analysis of observational studies, statin therapy was associated with reduction in risk of dementia, Alzheimer’s disease and mild cognitive impairment“. The cited references of Richardson et al (in response to the Lipitor label warning of additional risks, imposed by the FDA in 2012): “Published data do not suggest an adverse effect of statins on cognition.  The strength of available evidence is limited…” and a Cochrane review by McGuinness et al : “Demonstrated lack of benefit of statins compared with placebo on cognitive measures” actually contradict this claim! These issues were raised with Monash Chancellor Finkel, but the reply from his Director, Tony Calder abdicates responsibility: “The matters you allude to in your email are matters that are dealt with by University management therefore the Chancellor, as head of Council, will not be providing a response to your email.” 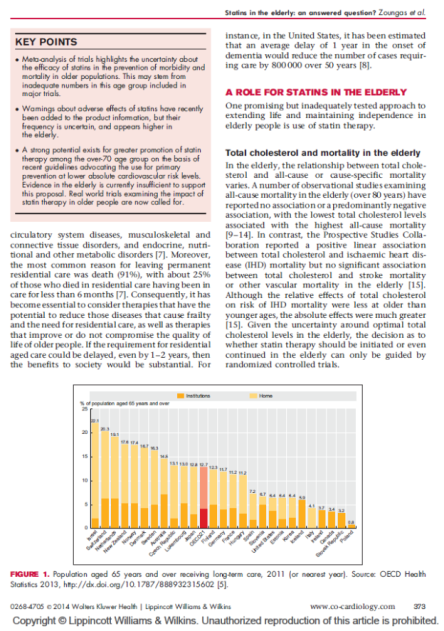 Solving the problem of an aging population?

Two years after Catalyst aired, a Med Jnl of Aust article advises that over the first eight months 61,000 have made up their own, negative opinion of the meds: “…changes in statin use occurred despite warnings in the Catalyst program that its content should not be taken as medical advice”. Co-author Sallie-Anne Pearson is noncommittal on consequence, having just published a study that concludes: “Deprescribing of statins may be indicated for some older people, because the evidence for benefit in primary prevention of cardiovascular disease is limited and there is an increased risk of side effects in old age.” Other, collaborative colleagues are more determined to restore Lipitor to its heyday position of the highest grossing drug. That popularity arose due to trial results on a surrogate outcome of LDL (Low Density Lipid) levels, without epidemiology data as to whether the drug improves survival rates in the community. We’re a trusting lot.

On the other hand the Brits stay true to form, by constant whinging about risks: http://www.ncbi.nlm.nih.gov/pmc/articles/PMC4714436/ 😉