Marcellus: Something is rotten in the state of Denmark (Hamlet 1.4.5)

These words, spoken to Horatio and Hamlet as they look upon wanton and drunken behavior, which has destroyed the nation’s reputation, are apt to the sacking of Danish Prof Gotzsche by the Cochrane Collaboration – the gold standard in medical evidence. Archie Cochrane founded an independent scrutineering of medical trials in 1993, so as to impartially evaluate claims of drug efficacy. Rules and tools for trainsmashing data from systematically gathered results are intended to provide an overview of pros and cons. Peter Gotzsche was an early appointee, directing the Nordic Centre of six neighbouring countries. The last half a dozen years has seen increasingly vocal criticism of commercial influence, and doubters of the Cochrane ideal often focused on mental health solutions. Gotzsche was stubbornly strident in criticism of psychiatry, disregarding my advisory sent 5th Nov ’14 that his condemnation of the profession as being the most lucrative for industry kickbacks was wrong – per his reference it was actually 4th most (in Australia 2009), with rheumatology #1. The download of a chapter ‘Pushing children into suicide with happy pills’ , linked in the flyer for his 2015 Mentalaz tour, concludes thus: Our citizens would be far better off if we removed all the psychotropic drugs from the market, as doctors are unable to handle them. 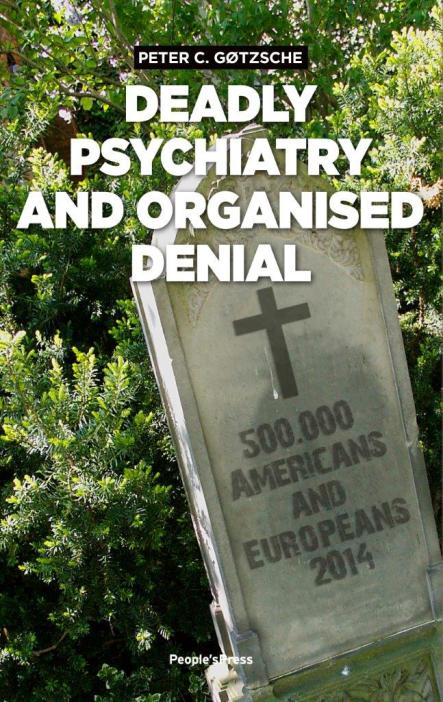 Not that the rheumies were off the hook. Peter’s 1989 ‘Methodology and overt and hidden bias in reports of 196 double-blind trials of nonsteroidal anti-inflammatory drugs in rheumatoid arthritis’ warned that “the quality of RCT trials in rheumatology may be so weak that it may be impossible to place any confidence in the … conclusion“. And on pg84 of Deadly Medicines “A rare admission that doctors’ opinions are for sale to the highest bidder was provided by Canadian rheumatologist Peter Tugwell, who wrote a letter to several major companies soliciting funds for CME conferences on behalf of an organisation called OMERACT: We think that support for such a meeting would be very profitable for a company with a worldwide interest in drugs targeted in these field.” Gotzsche aint a team player. Tugwell co-authored with Gotzsche, as well as 19 times with revered Cochrane founder Dave Sackett, whose HARLOTplc article at least gave humour to the reality that their business is for profit.

This month Cochrane’s Governing Board sacked Gotzsche, sparking outcry and protest resignations by 4 other of its 13 members. Six weeks earlier he’d written a critique of a Cochrane review for the HPV vaccine’s efficacy against cervical cancer. Peter’s team had worked on this since Jan 2017, when their analysis protocol was published. Points of disagreement raised were uncontroversial and moot, other than that the outcome of concern only developed after such a long time that surrogate indicators of lesions were instead analysed as being predictive of protection. Rather than dismissal being an exasperated or last straw reaction, the timing was merely coincidental. The Board’s statement informs us that lawyers had been on Gotzsche’s case since March, with a QC conducted independent review underway a month before publishing of the HPV challenge caused contention.

I suggest coincidence, rather than ruse, since the February trigger was possibly a letter attacking a Cochrane chief editor – Andrea Cipriani of the Common Mental Disorders group, over their recent review of 21 anti-depressants as being flawed and untrustworthy. However that team declare no conflicted-interest, and perusal reveals no alarming endorsements. Yet there’s no reference to the unwarranted attack or its target in the Board’s attempt at damage control – is this to protect the privacy of an innocent party, from their shaming by a woefully ill-informed press? Another, diplomatically worded re-analysis of Cipriani’s earlier 2009 anti-depressant report did highlight shortcomings of trial quality assessments, cautioning against the endorsement given for Pfizer’s Zoloft.

The muddy waters turn darkly Stygian.  Cipriani is Prof of Psychiatry at Oxford, which also homes Cochrane’s Pain & Palliative group under Prof Robert Andrew Moore (aka RAM, aka Andrew Moore), whose authoring name varies with context – independent and impartial, or sponsored spokesperson. There’s much overlap between pharmacotherapies with these groups, notably duloxetine/Cymbalta. Cochrane Editor-in-Chief David Tovey would be aware of the industry influence, since he acknowledged an email in March 2015 titled: ‘A 2nd Cochrane group is recruited’ – complaining about the rheumatology group and also including this: [Dr Nnoaham’s] 2008 Cochrane review on TENS for chronic pain and fibromyalgia was censored by your organisation’s Pain, Palliative and Supportive care (PaPaS) editors. Who are excellent examples of transparency, by not hiding their allegiances. Phil Wiffen and Andrew Moore et al chose to include a Pfizer employee in 2010 when conducting their own review into anti-convulsants for pain – surprisingly finding that “For gabapentin and pregabalin only we found reasonably good second tier evidence for efficacy..” (quoting the 2013 update). They reckon duloxetine’s pretty good too – http://www.bmj.com/content/348/bmj.g139/rapid-responses (well you would if you were paid as a consultant by Eli-Lilly, wouldn’t you?)

Grounds for disallowing Nnoaham’s complementary therapy review were that it shall be split into two reviews of TENS – one for fibromyalgia, and one for neuropathy. Except that Wiffen and Moore’s 2013 ‘Lamotrigine (an antiepileptic drug) for chronic neuropathic pain or fibromyalgia’ is an allowable combo! PaPaS also censored an unfavourable review of Pfizer’s gabapentin & pregabalin for pain relief in fibromyalgia on the grounds that lead author Nurcan Üçeyler had been paid speaker’s fees by Pfizer at neurology conferences. However Cochrane’s rule that neither the majority of authors nor the lead can be on the manufacturer’s payroll was also broken by their 2014 review into Neurontin/gabapentin, although Moore then complied in their 2017 update – by re-arranging the order of names to put Phil Wiffen first.

This is a coverup of misconduct. A façade. Gotzsche was certainly going beyond boundaries of expertise, and using his senior position within Cochrane to add weight to his personal opinions, which is contrary to the spokesperson policy allowing only statements on behalf of the collaboration. Years of emotive rants took a toll on his reputation – a tragic folly, when misconduct was there for all to see.

Disclaimer: I consider that the psychiatric profession takes prescribing of psychotropic meds VERY seriously, but worry about GPs playing at amateur shrink on the basis of dubious research evidence. I do not endorse Prof Gotzsche’s attitude, best expressed in his memo to Dr Dawson “Incidentally, I found out that some one has written about you and the way you treated my paper about the 10 myths in psychiatry. See attached [‘Asshole of the day – George Dawson MD’]”. George seems rather professional, actually: http://www.youtube.com/watch?v=ZyINjdCXkAQ