There is a cult of ignorance in the United States, and there always has been. The strain of anti-intellectualism has been a constant thread winding its way through our political and cultural life, nurtured by the false notion that democracy means that “my ignorance is just as good as your knowledge.” Isaac Asimov, 1980

More scientist than sci-fi novelist, the Biochemistry Prof at Boston Med School was a keen observer of humanity. Pres-elect Trump is a man foretold by this futurist, emerging from an ideas vacumn borne out of presentation pizazz. In life’s great reality show, it’s hardly surprising that the winner of the popularity contest would be another actor rather than an intellectual. Nonsensical lies, regardless whether delivered with aplomb or hysteria, can be convincing – and internet memes circulate too fast for any factual repudiation, particularly if response is limited to 140 characters on social media.

Cardiologist and Dean of Harvard Med School from 1935-’49 Dr Burwell advised new students: “Half of what we are going to teach you is wrong, and half of it is right. Our problem is that we don’t know which half is which.” Facts must constantly be re-evaluated in light of new understanding, but that doesn’t happen. Just as the consumer swallows whatever their doctor says, the faculty implicitly trusts their academics. Their faith isn’t tested by apparent misconduct – because it’s not placed in the person, but rather in the institution of medicine. Which intersects with politics.

Glib words, easily misinterpreted. The Victorian Premier was commenting on a maverick colleague of Dankenstein, and not necessarily everyone who gains financial advantage from their chosen career in healthcare. But there’s underlying truth. Commercial influence on treatment decisions isn’t just a risk due to the ‘bad apples‘ experimenting recklessly. Universities contribute to global evidence bases regardless of their fictional truth’s lack of veracity. No better example is given than the UNSW’s sacking of whistleblower Dr Ying Morgan, and exoneration of Prof Levon Khachigian – despite inarguable guilt. Photoshop is a new inclusion to the researcher’s armamentarium, equally as valid as ‘Adjusted for’. Perhaps the governance applied to physicians in practice can correct for this corruption of the evidence base? The Medical Board’s public listings of judgements are over 12 months delayed after decision (and an indeterminate time after the complaint), and any miscreants are protected by anonymity. Sadly, no.

Number 1 in scrips written is Lipitor, for obvious reasons (nothing to do with actually working tho’ – improved life expectancy from statin usage in an ideal, ie recruited into the trial, population is just 4 days). Our number 1 expenditure on medications, running at $3bn p.a., are the Hep C drugs – priced exorbitantly because they work. This could be considered extortion, and sets dangerous precedents. The up and coming big tickets on the PBS are the BioDiseaseModifyingAntiRheumaticDrugs, the _mab immunosuppressants (Enbrel fails to follow the _mab suffix naming convention). The early phase (I & II) drug trial centre Nucleus Network at the Alfred Hospital is fast expanding, largely due to rapid developments of these expensive, specifically targeted bio-agents. By the time efficacy is proven in a phIII Clinical Trial, and it will be proven, the drugs budget will be under assault.

There’s inadequate reports from phIV comparisons of treatment options among the general community, although 10 registries across Europe and the US have been collecting _mab outcome data for half a dozen years. One recent example published is that an incremental increase of 4 Quality-Adjusted Life Years results in a net saving to the healthcare bill with adalimumab, hence it’s recommended for younger patients. Though slowly, the picture is becoming clearer.

If only the politicians refrained from unsupervised social media usage, and also didn’t mistakenly boast of initiatives to supply psychotropic drugs to kiddies thus: “Last month, I visited a secret facility. I can’t tell you where it is, but I can tell you what’s going on there. It’s where we’re growing Victoria’s first crop of medicinal cannabis – a crop that will improve the lives of hundreds upon hundreds of kids suffering from severe epilepsy.” 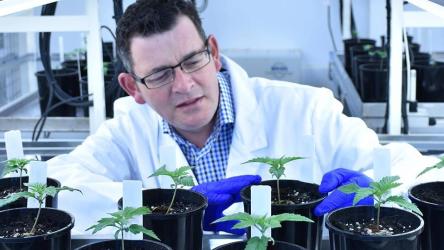